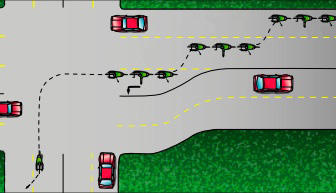 Much like losing socks in the wash perpetually confuses launderers everywhere, there seems to be some ongoing confusion about the proper way for motorists and cyclists to share the road. Is it because motorists view cyclists as an inconvenience and obstacle that slows traffic? Or is it that cyclists see motorists as impatient and threats to their safety? Who is better at sharing the road – motorists or cyclists? Neither really – allow me to explain.

We’ve all seen a driver carelessly pull in front of a cyclist or otherwise dominate the road because they’re in a big metal box that goes faster. On the other hand, we’ve also all seen a cyclist make an improper hand signal (if one at all) and pull into traffic, assuming they will be given space by motorists, because they have just as much right to be there. In order for each camp to peacefully (and safely) co-exist, each needs to understand how to share the road. After all, what’s more important than safety? NOTHING! (Unless if it’s more safety!)

According to the Ministry of Transportation, bicycles and mopeds are expected to ride about one meter away from the curb or parked cars. However, they are allowed to use any part of the lane if necessary for safety, such as to avoid obstacles like puddles and potholes, to cross railway tracks at a 90° angle and to discourage passing where the lane is too narrow to be shared safely. This means that cyclists should only take up the lane if they feel that they would be forced too close to the edge of the road as vehicles begin to pass them. As a motorist, this should be respected just as much as it is not abused by the cyclist. In addition to these conditions, bicycles and mopeds may enter the lane if they are travelling faster than the normal speed of traffic or if taking position to turn left at the next intersection. Yes, they are expected to use the left-turn lane just like any other vehicle. See figure 1 of the proper way to turn left at an intersection when on a bicycle.

Now that we’re all a little more educated, let’s discuss something we all share as Canadians – courtesy. All users of the road should respect others and be aware of the space they are entitled to. As a bicyclist, that means to signal properly and ensure that you are giving a reasonable amount of space for vehicles to pass when appropriate. As a motorist, be sure to be patient and wait for an opportunity to pass that is safe for both yourself and the bicyclist. It’s also very important to be aware of the signals cyclists use to communicate with you. Biking has become much more popular in recent years and has been established as a legitimate transportation method. It will only become more popular and it’s important that everyone learns to co-exist. In addition, biking has several health benefits like increased heart health and better fitness, but it’s also cheaper than driving and reduces greenhouse gas emissions. So if you ever find yourself behind a cyclist, remember that we all have a right to use the road respectfully, remember to be courteous, to be aware of their hand signals and above all, to share the road.