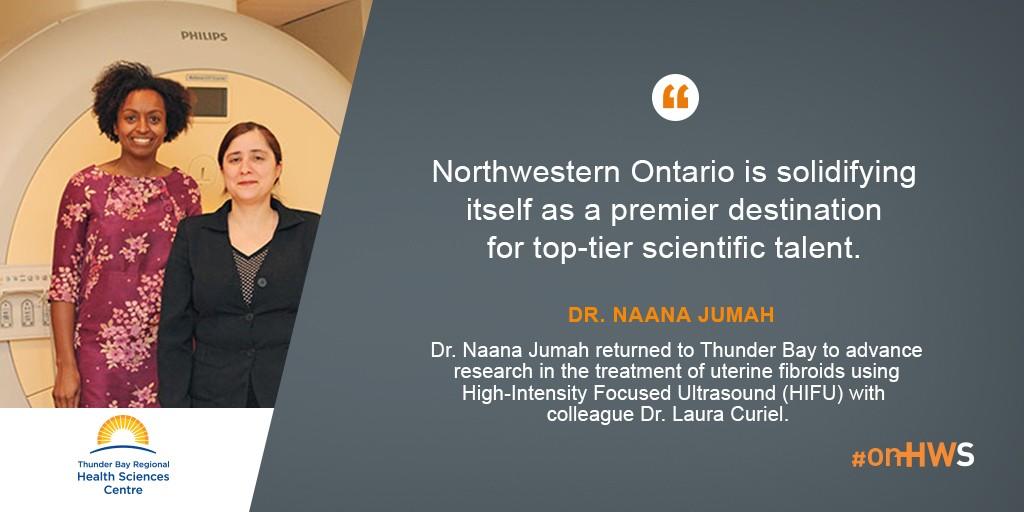 The Catalyst, a publication by CAHO (Council of Academic Hospitals of Ontario), recently highlighted how the Thunder Bay Regional Health Sciences Centre’s and its research arm is driving northern development, creating jobs and attracting global experts to Northwestern Ontario.

Something major is happening in Northwestern Ontario, and it’s changing the landscape of health research in Ontario. With investment, Thunder Bay Regional Health Sciences Centre (TBRHSC) and its research arm, the Thunder Bay Regional Research Institute (TBRRI) ‒ is driving the northern economy, employing many in highly skilled jobs, attracting top research talent and showing a healthy return on provincial backing. These benefits also translate to improving health outcomes and quality of life for patients.

In Thunder Bay, investment is fuelling a thriving knowledge-based economy. “Our investments are helping advance very significant research in Thunder Bay that will enhance the quality of life for residents in our region. [This investment] will also help create good jobs in our community,” said Bill Mauro, MPP for Thunder Bay-Atikokan.

TBRRI’s new cyclotron is a perfect example of how such investment sees a healthy return. (Cyclotrons are particle accelerators that create vital medical isotopes used in imaging for cancer treatment.) This new cyclotron will support local research helping find new ways of detecting and treating disease as well as guiding the development of new therapies by supplying isotopes to local researchers. This is especially crucial since there have been serious shortages in recent years (2007 and 2009) related to unscheduled closures of the Chalk River National Research Universal Reactor, a facility that is slated for closure in 2016.

Last summer, through the NOHFC, the Ontario government awarded TBRRI an additional $4 million towards the cyclotron and research funding. This represents an estimated $12 million in economic activity for Thunder Bay and northwestern Ontario. The cyclotron will also create 29 highly skilled jobs, and attract students to Thunder Bay to work and study under TBRRI scientists. The cyclotron facility ensures that educated, highly skilled individuals are trained, developed, and retained in northwestern Ontario.

“Our government is committed to making smart investments to improve health care and create jobs in northern Ontario,” said Premier Kathleen Wynne. “I am pleased that this support will help the Institute perform cutting-edge research that will improve health care while creating jobs.”

Thunder Bay’s world-class facility attracts world-class talent: Last March, TBRHSC brought home one of the best and brightest stars in obstetrics gynecology (OB/GYN). Rhodes Scholar Dr. Naana Jumah, a graduate from both Oxford and Harvard Universities, returned to the city where she was raised to further her OB/GYN work at TBRRI as a Clinician Researcher.

“[This recruit] goes to show that northwestern Ontario is solidifying itself as a premier destination for top-tier scientific talent,” said Dr. Roxanne Deslauriers, Scientific Director for TBRRI.

At TBRRI, Jumah is part of a team advancing an innovative research program in the non-invasive treatment of uterine fibroids using High-Intensity Focused Ultrasound (HIFU). The HIFU procedure is quick, painless and non-invasive ‒ an alternative to surgery, which is longer, more expensive and requires far longer recovery time.

TBRHSC and its research arm, TBRRI are changing the face of Northwestern Ontario, transforming the region into a major research hub with a diversified economy ‒ one investment, one facility, one collaboration, and one patient at a time.

Investments in Ontario’s health research enterprise have produced widespread and important discoveries that have led to a healthier, wealthier and smarter province. To learn more about the value of health research in Ontario, visit www.healthierwealthiersmarter.ca and join the conversation on Twitter using #onHWS.