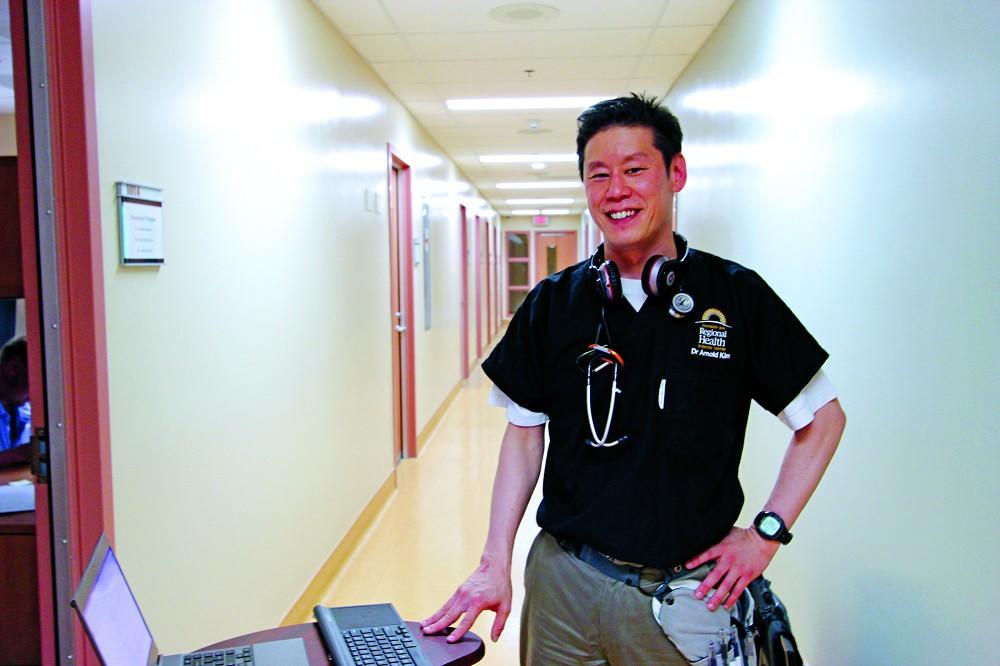 Are NOSM learners ready to code?

Dr. Arnold Kim, a hospitalist and clinical researcher at the Thunder Bay Regional Health Sciences Centre, plans to find out. Dr. Kim is debuting NLites, a new clinical documentation tool he developed, rolling it out first to medical learners in the Emergency Department. Like an electronic medical record or EMR, NLites allows teams of healthcare providers to collaboratively maintain medical documents containing an up-to-date summary of the patient in front of them. The patient’s records can be digitally stored, accessed, and edited by authorized healthcare professionals caring for the patient.

But EMRs are nothing new. What makes NLites unique is that allows clinicians to type in their notes in their own personal style. The system intuitively interprets the text that the clinician enters and translates those notes into a computer format using context-free language. NLites stores those notes in a way that allows data retrieval, reports, and decision making. This reduces the substantial amount of time and effort clinicians spend documenting patient information and ordering tests, seamlessly combining the two into one step.

“When we think of documentation in the medical world, it is typically about a descriptive representation of patient encounters, clinical analysis, and planning. But it really doesn’t come to life until someone else reads it, and even then meanings can sometimes be ambiguous,” said Dr. Kim. “Programming languages on the other hand are unambiguously understood by machine systems.”

Dr. Kim said that clinicians often write what they plan to do in the description part of the patient’s chart, and then enter the actual action – what doctors call “the imperative” – in a separate spot.

“What this project does is take the same properties as software languages and blend it with the formalized structures we have in medical documentation. This allows machine systems to understand and process the notes, even as you’re typing. They can take direct action based on the content of that documentation,” he said.

For example in a traditional EMR, a doctor might type in his or her notes that more tests are needed, and then actually order those tests on a separate form. NLites helps combine those steps into one, either ordering those tests or suggesting a range of possible actions the doctor could take, saving time and creating a more efficient work flow.

“This project allows clinicians to document in a way that machines understand so that the imperative and the descriptions become one and the same thing,” Dr. Kim said.

Dr. Kim recently developed and launched a clinical trial at the Health Sciences Centre to investigate how likely medical learners in the Emergency Department would be to use the software. Learners, rather than working doctors, were chosen because they are already in a learning environment, and because they are relatively familiar and comfortable working with new technology, Dr. Kim said. He hopes to conduct clinical trials at other institutions within two years.

Thank you to all the people and organizations who have supported the TBRRI through the Thunder Bay Regional Health Sciences Foundation to make it the world class research centre it is today! Together, we’re building a healthier, wealthier, and smarter Northwestern Ontario.