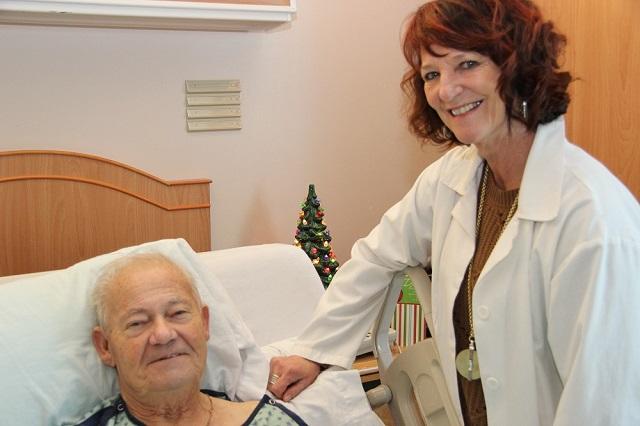 As a Nurse Practitioner working in trauma, Bonnie Zabirka sees a very diverse population. “Many of the people we see in trauma are a high-risk population,” she says. “Some patients have taken risks and ended up injured. You need to be able to respect them as human beings. To be in this role, to care for people, there has to be respect – for different practices, spirituality, and cultures. I want to be respected by the people I care for and I can’t expect that if I don’t respect them.”

Zabirka is this year’s recipient of the Walk the Talk – Respect award. Each year Thunder Bay Regional Health Sciences Centre (TBRHSC) distributes Walk the Talk Awards in a number of categories to acknowledge and reward physicians and staff members who go above and beyond in their work. Nominated by their peers, these individuals are helping the TBRHSC turn its vision of becoming a world-class patient and family centred academic health sciences centre into a reality.

This is the first year employees were asked to nominate a fellow employee in the Respect category for “an individual who creates and encourages positive attitudes, beliefs, and behaviours that recognize the importance of others and is an ambassador of respect at TBRHSC.”

For Zabirka, showing respect goes beyond words and even beyond clinical care. “The picture is much bigger. Respect means looking at how we can assist our patients with improving their lifestyles, looking at the big picture, and asking ourselves what we can do as an organization to change harmful practices and prevent injuries.”

Zabirka says respect has a significant impact on the patient. “When you show you care for patients as human beings, I think they heal faster. A healing environment is not just physical. It’s also emotional. Our care doesn’t just stop at the bedside. I think it’s our responsibility to try to help them heal in every aspect and respect is the first step.”

There are benefits too for the healthcare provider who shows respect to patients and families. “They give me so much back,” says Zabirka. “You develop a bond with patients and with families when you respect them.”

Zabirka spent time working in Toronto with an even more diverse population, but she says respect for differences is something she learned from her own parents growing up. “I was taught that everyone is a human being. If we don’t accept people for who they are, this world isn’t going to be a very good place to live in.”

A 30-year veteran of local healthcare, Zabirka says she still loves coming to work. “I feel I’m privileged to have the job I have and to work with the colleagues I work with, and to care for the patients I care for.

Respect makes the way we work as a team easier and the way we care for patients better.”