Hospital’s smoke-free grounds focused on promoting health for all 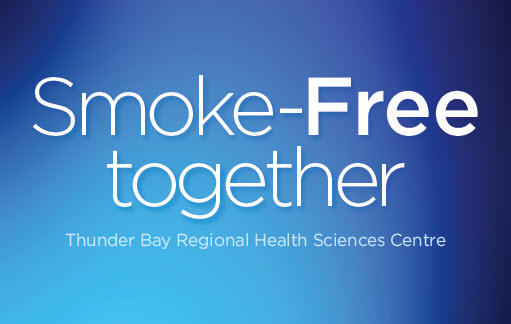 It is a well-known fact that smoking is directly related to various chronic diseases such as cancer, heart disease, stroke, respiratory diseases and the list goes on. However, the topic of hospitals promoting smoke-free environments continues to be controversial. Since re-committing to smoke-free grounds on September 30th, 2013, Thunder Bay Regional Health Sciences Centre (TBRHSC) continues to focus on keeping its grounds smoke-free in an effort to make the hospital a healthier environment for patients, visitors, staff, and volunteers.

In Northwestern Ontario smoking rates are higher than the rest of the province (22.3 percent versus 20.4 percent), and cancer and heart disease rates are also higher. One of the leading causes of chronic disease is smoking. Tobacco kills more Canadians each year than all deaths caused by accidents, suicides, murders, and drug abuse combined. 50 percent of people who smoke will die from a smoking-related illness, and 50 percent of those deaths will occur prematurely in people between the ages of 35-h65 years. And while the negative effects of smoking on health is well documented and understood, environmental policies aim to protect everyone from the harms of second-hand smoke, and support those who want to remain smoke-free.

When it comes to implementing environmental policies, such as TBRHSC’s smoke-free grounds (which is part of the City of Thunder Bay’s By-Law #052-2010) or changes to provincial law, like the Smoke-Free Ontario Act, the primary focus is on health protection for all. A common argument is that these policies and laws are put in place to punish smokers. That is simply not true.

It’s not just people who smoke who can be made ill. Second-hand smoke is responsible for approximately 1,000 deaths in Canada each year – with approximately 300 lung cancer deaths and 700 deaths related to coronary heart disease. Also, many people are sensitive to smoke in the air. Inhaling it can trigger a respiratory attack, make breathing more difficult for people already suffering from respiratory issues, and also increase worry about developing cancers. The concern about second-hand smoke isn’t about the smell of smoke that some people don’t like; it’s the health concerns associated with the smell.

Some people have suggested that a smoke-free policy is comparable to taking away potato chips from overweight individuals or banning coffee due to its smell. However, another person’s junk food or caffeine drink won’t cause cancer the way that second-hand smoke can.

While 22 percent of people in Northwestern Ontario smoke, this means that 78 percent do not smoke. Therefore, smoke-free policies favour the majority of people who live a tobacco-free life. Research shows that approximately 68 percent of those who do smoke have thought about quitting or want to quit smoking. Additionally, research also shows that total smoking bans, such as 100 percent smoke-free grounds (no smoking huts), which primarily focus on protecting non-smokers actually help to motivate and support people who have quit smoking or want to quit smoking. A smoking ban at yet another public park or at a workplace can tip some people toward quitting smoking for good or even cutting back on the number of cigarettes they smoke.

TBRHSC is sensitive to and respectful of people’s addiction to nicotine – the powerful drug found in tobacco products. Patients who must be in the hospital for treatment are provided with different smoking cessation options: nicotine replacement therapies (patches, gum, inhalers), a smoking cessation nurse who will meet them at bedside and develop a quit plan with them then follow-up with them for up to a year post-discharge, and even more opportunities for support in quitting as outpatient clinic staff are trained in smoking cessation.

Smoking reduces the effectiveness of treatments, delays the healing of wounds, and can continue to impact a patient’s health so they must return to the hospital for care repeatedly. The impact on the effectiveness of care can increase the burden on our healthcare system. Studies show that cancer treatments don’t work as well, impacting quality of life and even length of life among cancer patients who continue to smoke. They also show that patients who smoke stay in recovery up to 20 percent longer and broken bones can take twice as long to heal. Therefore, it is in everybody’s best interest – patients, healthcare providers and visitors alike – to help people to quit smoking. It’s never too late to quit smoking.

Keeping our grounds smoke-free helps to protect the air quality and it also helps to curb addiction triggers for nicotine and smoking. For example, patients who are trying to quit smoking will feel less tempted if they don’t see other people smoking outside their window. While it’s impossible to completely protect people from seeing people smoking or smelling tobacco smoke, the hospital is committed to being one place where the health of patients is put first. Helping people to quit smoking is one of the most important supports that can be provided. Hospitals also play a role in prevention, including tobacco use prevention.

Everybody can do their part in making your hospital a beacon of health in our community. TBRHSC aims to help people to be healthy together, and creating a healthy environment for all is part of that.