Father and Son Recognized for Service 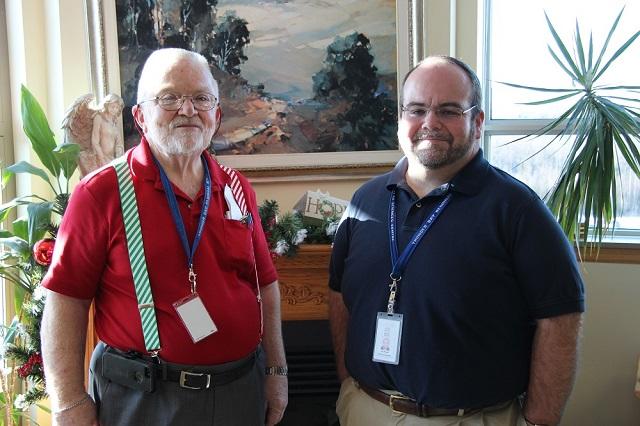 Their careers may have taken them down divergent paths, but this month Dr. John Derek Wyant, General Surgeon, and his son Ted Wyant, Senior Accountant in the Accounting and Management Reporting department, are together being recognized for their years of service, 45 and 5 respectively.

Each year, Thunder Bay Regional Health Sciences Centre (TBRHSC) recognizes all staff who have served the organization in increments of 5 years. Staff with 5, 10, 15, etc. years of service with the organization are invited to a reception where they are personally thanked and presented with a pin of recognition by the President and CEO and the Senior Management Team.

Dr. Wyant was born in London, Ontario, and growing up he spent time in South Africa, England, and Montreal. At the age of 12, he decided to become a physician, impressed with the nurses and physicians at the Montreal Sick Children’s Hospital where he was admitted for 6 weeks.

After studying medicine at McGill University, graduating in 1962, Dr. Wyant completed a residency in General Surgery at the Royal Victoria Hospital. He then moved on to research and a Master’s degree at McGill, where he met a surgeon who had spent a year working in Thunder Bay.

One of the biggest changes he’s seen in his 45-year career in healthcare, besides major advances in surgical equipment, techniques, and medication, has been the adoption of government-subsidized medicine in the early 1970’s. “Before that, you’d only go to a doctor if you were really sick.”

Looking back, Dr. Wyant says he wouldn’t want to change a thing. “What is most rewarding is when I’m out in public and people introduce themselves and say ‘you probably don’t remember me but a few years ago you saved my life.’ Also, to see kids – they come in for surgery and then they go home and they’re healthy.”

Although Ted may not work directly with patients, many people remember seeing him as a child accompanying his father on rounds. “It was our Saturday morning routine – breakfast out and then I’d go with Dad when he made his rounds. Now sometimes people see me in the hospital and recognize me from back then.”

“Dad was never one to wear the traditional white physician’s lab coat at the office. Instead, he sported eccentric suspenders which I think had a way of putting his patients at ease, especially children. After 45 years, he’s accumulated quite a collection.”

Dr. Wyant has no plans to retire anytime soon. “I’ll retire fifteen minutes after my funeral.”

“Wouldn’t it be great if, after 45 years, we all viewed our careers in the same way?” said Ted. “We should all be so lucky.”