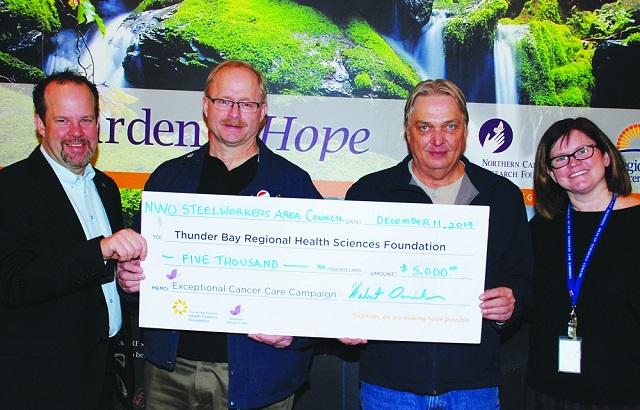 The ‘aha’, eye-opening moment for Herb Daniher was hearing that one in every two people’s lives in our region is touched by cancer – either because they have cancer, know someone who has/had cancer, or experienced a loss from cancer. This moment inspired Daniher to reach out to the labour sector in the region and to his Northwestern Ontario Steelworkers Area Council to back the Health Sciences Foundation’s Exceptional Cancer Care Campaign.

The statistic was part of a presentation on the importance of the Exceptional Cancer Care Campaign and the state-of-the-art equipment it is putting in the hands of the cancer care specialists at Regional Cancer Centre Northwest at Thunder Bay Regional Health Sciences Centre. Bob Hookham, a member of the Exceptional Cancer Care Campaign Cabinet, had approached Daniher, who is staff representative for the local United Steelworkers and has a high profile in the labour industry, to endorse a letter appealing to the unions in the region for donations to the campaign.

Daniher was quick to bring the request for donation to his own Area Council, which represents 10 member locals from Manitoba to Wawa and north to Hearst/Kapuskasing. “I knew I could get buy-in because the Campaign is truly a regional initiative benefiting all the people of Northwestern Ontario,” he says. “Many of the union locals have a hospital in their community they would prefer donate to, but this is different. The regional cancer program out of the Thunder Bay Regional Health Sciences Centre is set up to provide chemotherapy treatment in each of the region’s hospitals, allowing our members and their loved ones to stay in their own community.”

The Northwestern Ontario Steelworkers Area Council committed $5,000 to the Exceptional Cancer Care campaign on behalf of its membership and has asked members to make a personal donation as well to honour their departed brothers. “Since 1986 we have had about 20 fatalities in our region due to industrial accidents,” says Daniher. “We call it a commemorative donation. Each of our affiliated locals is making a donation commemorating its fallen brethren, lost tragically. This is important for us.”

According to Daniher, the campaign really resonated with the regional membership, and it was quick to respond with donations. “United Steelworkers District 6 Director Marty Warren stepped up to plate immediately upon hearing of this worthwhile initiative, which supports working families and their communities across the north,” he says. “Then National Amalgamate USW Local 1976 President Steve Hadden, on behalf of its members, was pleased to make a contribution towards first-class cancer treatment for our region.” Both of these generous donations will allow the Steelworkers to exceed its overall contribution goal.

Daniher describes their donations to the Exceptional Cancer Care campaign as ‘tangible’. “People can see the effects of it, feel it, and experience the effects of it by having the best possible cancer care and chance of survival here in the region where they live.”

The following is a partial list of United Steelworker members who were killed on the job in industrial accidents in our area: