A Cyclist for All Seasons 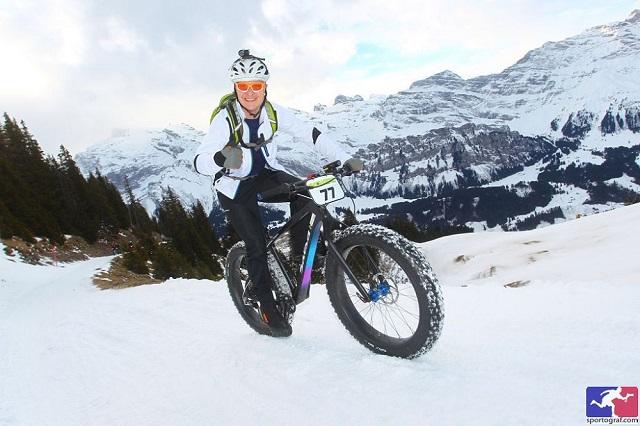 In January, when Matt Lapointe headed off to Snow Epic, Europe’s first winter fat bike event held in the heart of the Swiss Alps, his goal was just to make the top 60. Lapointe came in 30th place out of 122 starters, one of only two Canadian cyclists to start the race. Not bad for someone who tried out a fat bike for the first time just three years ago.

“It was amazing just to be there at the line-up next to the Olympic champion and the current Masters champion,” he says. The Therapeutic Recreationist at Thunder Bay Regional Health Sciences Centre joined other riders from 20 countries to compete in 5 races over 3 days on groomed trails and slopes normally reserved for skiers. Daily riding times varied from about 2 to 5 hours.

The first day was a 22-kilometre race climbing for 600 metres on ice and snow. Day two was 15km climbing 900m and descent, followed by two “eliminator” heats. Lapointe won his first heat but was eliminated in the second.

Lapointe is a long-time mountain biking enthusiast. In Thunder Bay, he rides trails and cycles to work year-round.

He says fat bikes are a great way to stay active during winter and for cyclists to keep up their training off-season. For those who would like to try a fat bike, Lapointe recommends renting one for a weekend. “I’d say ‘try it.’ I know they look goofy and they’re heavy, but they’re designed well and they pedal amazingly well. They are a lot of fun and a great way to keep riding throughout winter.”

Fat bikes are essentially bicycles with over-sized tires (up to 4 inches wide) and are designed for riding on unstable terrain such as snow or sand. Although the handling of the bikes is different from bikes on narrower tires, they require no previous experience to ride adequately on snow. Low tire pressure means better traction, making them ideal for riding on snowy terrain.

Although fatbiking on snow and ice may not be for everyone, Lapointe says there are plenty of ways to stay active in winter.

“Just have fun. If you live in Northwestern Ontario, you need to have an outdoor sport, whether it’s walking, ice fishing, skiing, or snowshoeing. Do something outside.”

Some events to keep in mind if you’d like to watch or ride a fat bike this winter:

For more events, check out the ‘Fatbike Thunder Bay’ group on Facebook.