Volunteers Give Back to Clinical Laboratory 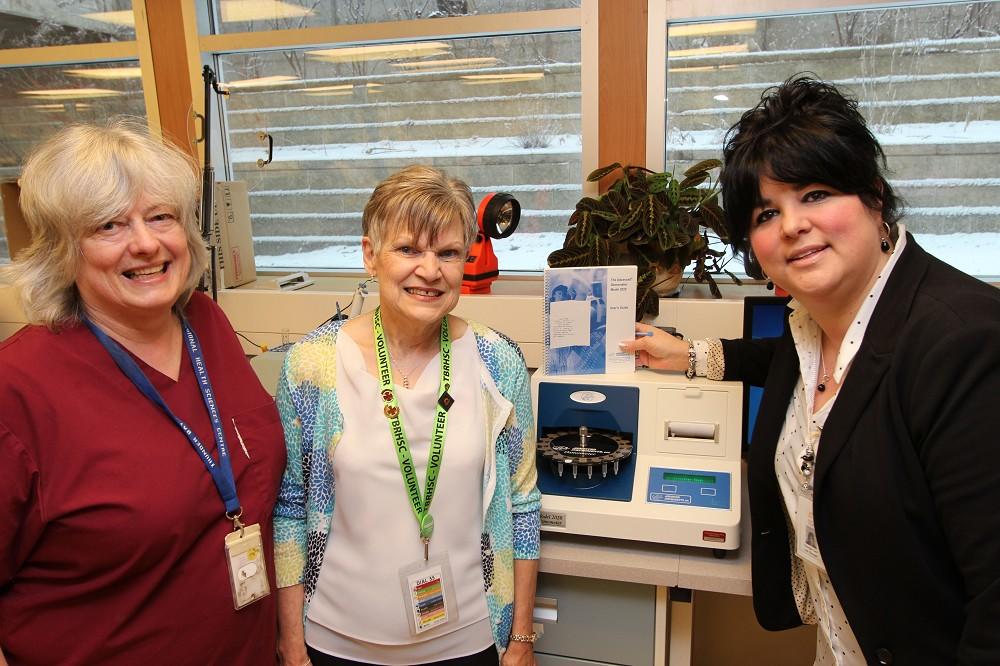 When Sheila Prus saw a new osmometer arrive in the lab, she wondered if Christmas had come early. “We were so surprised and humbled that the Volunteer Association thought of us,” says Prus, Biochemistry Coordinator in the Clinical Laboratory at Thunder Bay Regional Health Sciences Centre (TBRHSC).

Prus says the new osmometer, made possible through a $25,000 donation from the Volunteer Association to TBRHSC, will have a direct impact on patient care. It is used to test urine and plasma samples for patients who may have electrolyte imbalances caused by disease such as chronic renal failure and diabetic acidosis, or overdose from alcohols, including ethanol, or methanol.

In 2014, the lab performed 2271 osmolality tests, including plasmas and urines.

“The osmometer is a real workhorse,” says Prus. “It runs constantly, so having only one for the whole region is stressful.” The osmometer currently used came from McKellar General Hospital. “We’ve never had a back-up and it is very stressful for our department if it stops working.”

Physicians in Renal Services and the Emergency Department depend on the lab’s ability to provide prompt test results to know if a patient needs dialysis urgently to prevent kidney loss.

“Having a new osmometer is amazing for patient care and will help relieve stress for Medical Laboratory Technologists (MLT) and physicians,” says Georgia Carr, Clinical Laboratory Manager. The older machine will serve as a back-up.

The Volunteer Association is a major fundraising contributor to TBRHSC. It owns and operates Seasons Gift Shop and the HAAO Nevada and OLG Ticket Centre. Funds raised are used to purchase medical equipment and enhance patient care.

Tucked away on the lower level of the hospital, the Clinical Laboratory is open 365 days a year and employs almost 140 professionals from a variety of disciplines. “They really are some of the unsung heroes of the hospital,” says Carr. Given the fact that 85% of diagnoses are based on lab results, the department touches nearly every patient in the hospital.