Cancer Care in Northwestern Ontario Getting a Huge Boost 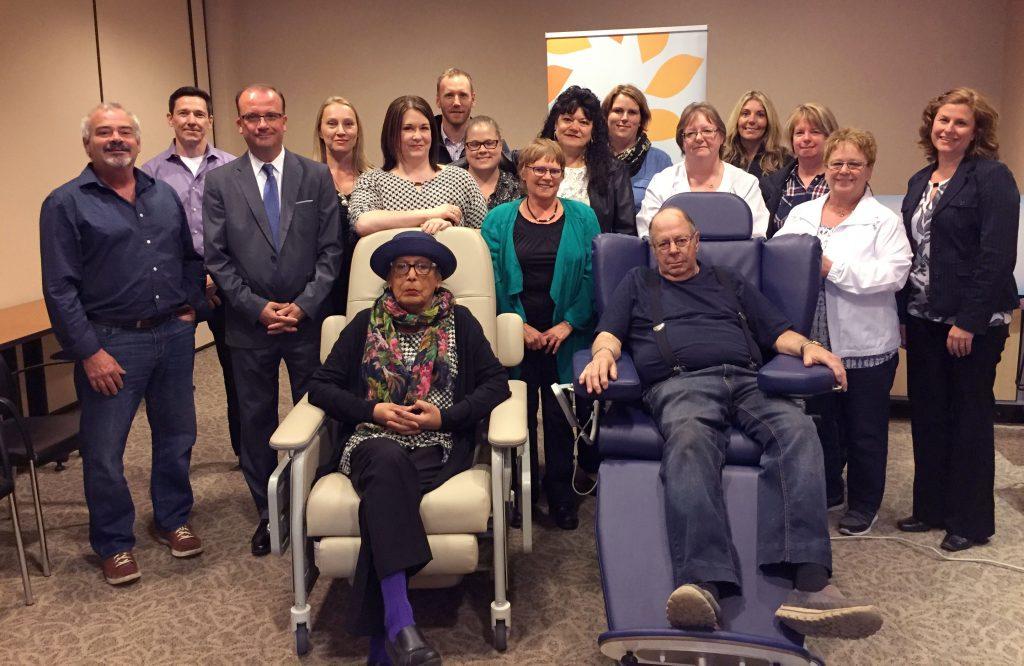 Lisa Sandham’s mother, Francine, spent countless hours at the Thunder Bay Regional Health Sciences Centre, particularly in the Renal Department where she received dialysis several times a week during the last few years of her life. She remarked to Sandham one time after finishing a round of dialysis, “If I ever won the lottery, I’d replace all those chairs!” She found them to be quite uncomfortable, especially after sitting in them for hours at a time during treatment.

This comment prompted Sandham to consider what she could do to help turn her mother’s wish into a reality. So began the planning for the Greek Supper Club event that would eventually take place on September 27, 2016 after over a year of hard work on Sandham’s part, along with the support of multiple sponsors.

“I love food, and I wanted to bring an event to Thunder Bay that would provide an intimate atmosphere accompanied by great food,” she said. “I chose Greek cuisine to highlight, in particular, because Mediterranean cuisine is considered to be quite healthy and I wanted an event that could raise funds for the Health Sciences Centre, but also promote foods that fuel our bodies and keep them well,” she added.

Hosted by Chef Jean Robillard of Bistro One, the sold-out Greek Supper Club featured Chef Peter Minaki, an authority on Greek cuisine. He oversaw the preparation of a six-course Greek meal, with each course carefully paired with a Greek wine. Guests were thrilled with the food –with the Beef Gyro sliders named a favourite. Chef Jean said, “I and the rest of our culinary team were extremely excited to participate in this very worthwhile cause. It was a thrill for us all to work and learn from such a highly respected master of Greek Gastronomy.”

“The evening was a tremendous success,” remarked Sandham. “The food was exceptional and those who attended had a terrific time. I’m also proud to announce that we raised $11,291 for the Renal Fund at the Thunder Bay Regional Health Sciences Centre, with an additional $1,300 to the Northern Cardiac Fund.”

Thanks to the proceeds of the event, a new Treatment Chair for the Renal Department was purchased this Spring and unveiled to supporters of the Greek Supper Club yesterday.
Mary Wrigley, the Manager, Regional Renal Service remarked, “The chairs in our Department are used by patients from 7 a.m. until 11 p.m. six days a week when people are receiving their dialysis. Typically one treatment takes between 4-5 hours, so you can imagine that having a comfortable chair is essential to our patients’ wellbeing.”

The chairs at the Hospital are not just like any other chair one could buy at a retail store; they are specifically manufactured to be used in a medical facility. Features include upholstery that has antimicrobial and antimycotic properties, the ability for the chair to be adjusted electronically in multiple configurations by the patient, and a backrest that supports cardiopulmonary resuscitation. Additionally they are built from steel frames, and can accommodate patients up to 440 lbs. “Having a new chair in the Renal Department will go a long way towards improving our patients’ comfort and experience while they are here receiving treatment and I’m delighted that Lisa has chosen to direct the Greek Supper Club proceeds to this new chair,” said Wrigley.

Sandham is already well into the planning stages for the 2017 event, which will take place on Tuesday, October 3 at Bistro One, and continue to raise funds for the Renal Department. “I’m so thankful for all those who believed in this event in its first year and am enthusiastically preparing for another fantastic evening this Fall,” she said. “Knowing we can work together to better patient care is what keeps all of us motivated to have a successful event.”