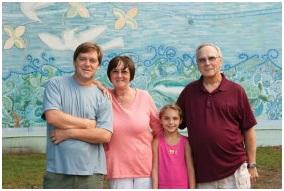 “Depression really hit me when I returned home after rehab,” says Thomas, a stroke survivor from Florida.  “Three months ago I had walked around here, fixed things and mowed the lawn. I soon found I would have to depend on other people for things as simple as changing a light bulb.”

He credits “a very understanding wife” and an anti-depressant for helping him deal with his depression.

says Dr. Robert Robinson, a psychiatrist at the University of Iowa and a researcher who studies post-stroke depression. Depression can also be a normal psychological reaction to the losses from stroke.

Dr. Mark Huang, a professor of rehabilitation at the Rehabilitation Institute of Chicago, says, “Some survivors who are depressed may not find the motivation to work in rehabilitation. They feel discouraged and hopeless. They may feel fatigued, sleep poorly and don’t eat well.”

Depressed survivors need treatment if they are not progressing in rehab. “Their thinking skills are also affected by depression,” Dr. Huang says.  “They have a hard time concentrating in rehabilitation. Their attention to detail is affected as well. Treating depression can improve thinking skills. The rehab team needs to be on the lookout for depression. They need to notice the survivor’s mood and participation level.”

Dr. Huang recommends consulting a psychologist or psychiatrist as soon as depression is suspected.

“Several studies demonstrate that most patients who suffer depression after a stroke do not receive treatment for it,” Robinson says. “Many doctors, as well as family members, tend to explain away depression as an understandable response to the loss and impairment stroke produces.

Depression can be effectively treated whether it is the result of a biochemical change in the brain or it is a psychological reaction to the stroke. He stresses, “It is so important for family members and caregivers to make sure that survivors do not simply explain away their depression and deny they need treatment just because it is ‘understandable.’”

Treating depression not only improves the survivor’s mood, it improves their physical recovery and their cognitive or intellectual recovery as well. Without treatment, depression lasts about nine months to a year, he says “In several studies, investigators have found that post-stroke depression can go on for up to three years after the stroke.”

In a study published in Stroke: Journal of the American Heart Association, Robinson found that the anti-depressant nortriptyline relieved depression in over three-fourths of the stroke survivors studied. In contrast, depression improved in only one-fourth of the survivors who received a placebo.

Social support is crucial for survivors dealing with depression. A 2002 study in Topics of Stroke Rehabilitation found that depression was related to lower levels of support. Survivors typically find support among family, friends, a stroke support group, a psychologist, or a combination of all these sources. Psychotherapy is a helpful adjunct to medication.

Dr. Huang also suggests a peer support group because survivors can relate to each other’s experiences.

Wally Clarke, a 20-year stroke survivor from Ottawa, Canada, firmly believes that social support is needed. “After a stroke, when it hits you how many things are now taken away from you, if there is someone who supports you and explains things in a different way, people with stroke can move on. Otherwise they may vegetate.”

Survivor Dee Bjork of Peoria Heights, Ill. says that although anti-depressants have helped her, a support group was her best medicine.

“I was bitter and depressed,” Bjork says. “The major crux of the stroke is the loss you feel. I grieved for two years or more. With my current doctor’s help, I recently felt good enough to get back out and live alone. For me, a support group has been the best. It was the first time I felt I was talking to someone who knew exactly what I meant, a fellow stroke survivor.”

John, a stroke survivor who requested his real name not be used, believes in early treatment for depression. “About four or five months after my stroke, I began to realize that my life had changed forever and depression inevitably crept in,” he says. “Everything came to an abrupt halt as depression and its associated problems took over my life to the exclusion of everything else.”

John’s anti-depressant took a couple of weeks to start working. It then improved his memory and other cognitive skills. He says to other survivors, “Don’t try and tough it out — get treatment fast.”

Everyone involved in the survivor’s recovery needs to be aware of the survivor’s depression and be ready to respond to it aggressively. Treatment and support can help ease the pain and help the survivor make gains in recovery.

If five or more of these symptoms persist for longer than two weeks, depression may be the cause. Talk to your physician or psychiatrist about treatment possibilities.

Distinguishing Between Apathy and Depression

Apathy presents itself as indifference — the person seems to not have emotions. People with apathy do not seem motivated or interested in things. Often, the person is generally satisfied and content with doing nothing — and doesn’t seem bothered by it.  In many cases, it’s of more concern to the family or caregiver.  This is more often seen in right brain strokes.

Depression, on the other hand, is an emotion in which the person feels sad and often discouraged, hopeless about the future, and perhaps suicidal.

In Thunder Bay, Ontario, the Stroke Recovery Network is a support group for stroke survivors and family and/or caregivers.  For more information contact the March of Dimes at (807) 345-6595.